Facebook’s First Ever Ad Gets a Hilarious Toilet-Themed Parody

It’s no secret that Facebook’s not doing so hot ever since they went public. The social network recently hit 1 billion users and to keep their numbers up (and perhaps to try making Facebook more relevant?), they recently released their first ever ad. 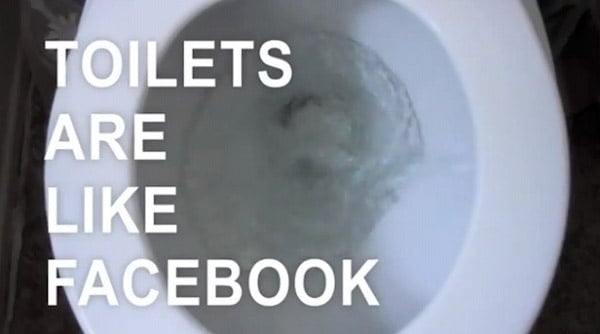 Oddly, the ad highlights how Facebook is like a chair. I kid you not. The ad talks about chairs and comes across as one of those artsy-fartsy videos that force you to come to some deep realization at the very end. Throw in doorbells, airplanes, and bridges, and that’s the ad for you in a nutshell.

Here’s the original Facebook ad, in case you haven’t seen it yet:

There’s only one mention of Facebook in the commercial, and the site isn’t featured even once, although that’s understandable considering this is a branding ad. However, the ad leaves a lot of room for ridicule and that’s the route that a lot of people did since it came out. One parody likens Facebook to toilets – you’ll have to check out the clip below to find out why. (Warning: Language NSFW)