I’m still rather disappointed that NASA retired their Space Shuttle fleet leaving America to hitch a ride aboard foreign spacecraft to get in orbit. If you’re a fan of the Space Shuttle, you probably been following what NASA is doing with the spacecraft now that they’ve been retired. Endeavour recently took its final journey to California where will spend the remainder of its days. 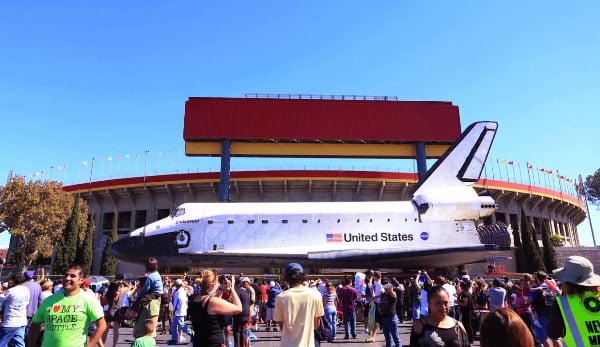 The Endeavour was given to the California Science Center and made its trip there aboard its carrier aircraft, making fly-bys of several areas before arriving at Los Angeles international Airport. Once the Space Shuttle reached L.A., it made a 12-mile trek across challenging city streets to the California Science Center. Thousands of fans turned out to get a glimpse at the endeavor as a completed its historic Mission 26.

If you weren’t able to see Endeavour in person as it made its way through Los Angeles, cinematographer Matthey Givot has put together a very cool time-lapse video of the shuttle’s journey, cleverly titled Mission 26: The Big Endeavour.

I knew the Space Shuttles were big, but it really drives home how massive the spacecraft are when we see them on a typical city street.