If you have a HTPC in your living room or spend a lot of time using a tablet or smartphone and wish you had a small keyboard, check this out. A company called FAVI Entertainment has released a palm-sized keyboard that supports just about any portable device on the market including Android tablets and just about anything else with Bluetooth connectivity. The keyboard features a trackpad for pointer control as well. 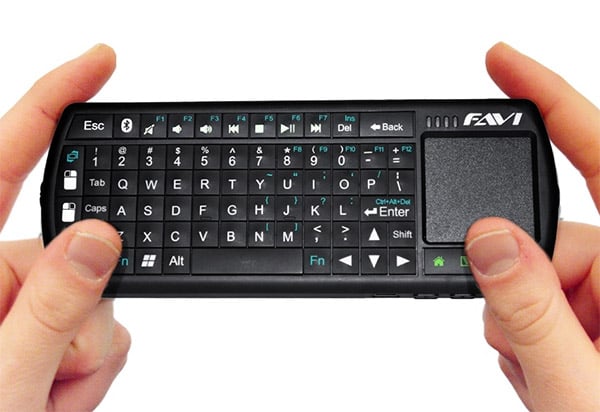 Looking an awful lot like another keyboard we’ve previously featured, this on is called the FAVI Mini Bluetooth Keyboard and is designed for thumb typing. It has a full QWERTY keyboard and the keys are backlit for use in dark environments. The trackpad is on the right side of the keyboard and on the left side are buttons to control left and right mouse clicks. The trackpad also supports tap to click. The keyboard has a full assortment of media playback control hotkeys, as well as PowerPoint slide control keys. It’s even got a laser pointer built into the end. 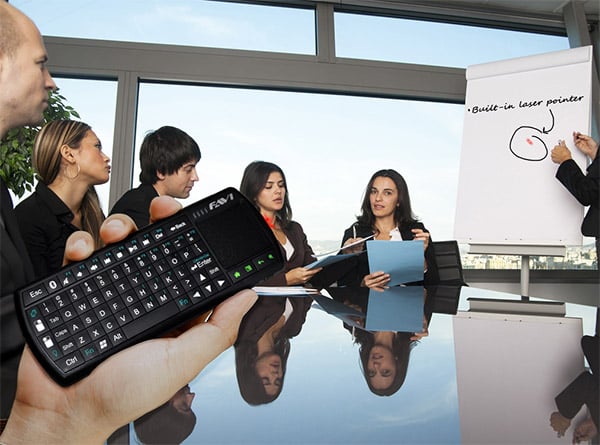 Any device that has Bluetooth built in will be able to connect to the keyboard and computers or other devices with a USB port, but lacking integrated Bluetooth can use the included receiver. The wireless range for the keyboard is 50 feet, and it is available now for $49.99 over at Staples.