Could You Live in a 3×3 Meter Space? This Cube Shows You How You Can!

I’ve seen homeless people walking around with nothing more than the clothes on their back and a piece of cardboard that serves as their bed-slash-umbrella-slash-bathroom wall, depending on the situation.

There’s more than enough space for these people to get settled in, but unfortunately not enough resources to make it happen. 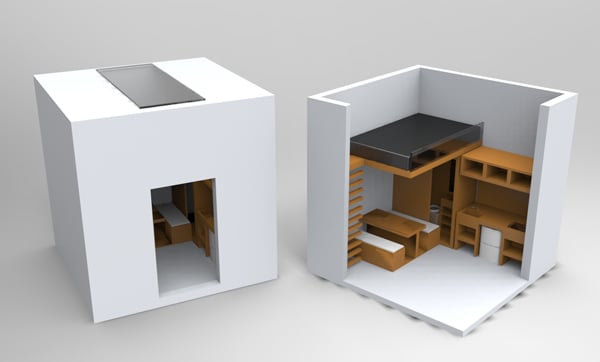 The Cube home design by Justin Chong might just be a concept for urban living, but there’s huge potential for this to be used for urban housing for the poor. Just imagine how many people you could get off the streets and into these relatively cushy, compact living quarters that wouldn’t require that much space in the first place.

The Cube fits an entire apartment into a 3×3 meter space. There’s even a bathroom with a water-saving shower and toilet, a kitchen with an induction stove and a small refrigerator, plus there’s a dining area that can seat up to four people.

There’s also a loft bed that fits two, which can be accessed by the ladder you see beside the dining area.

Pretty awesome, right? Of course, there’s not much room for all your other stuff, but this is the most efficient use of space I’ve seen in years!