Advancements in biotechnology continue to amaze me. We’re rapidly approaching the point where human/cyborg combinations are becoming more and more plausible, as is evidenced by this recent accomplishment by the Rehabilitation Institute of Chicago. This past sunday, a man wearing the first “thought-controlled bionic leg” used the limb to help him ascend 103 floors of the skyscraper formerly known as the Sears Tower. 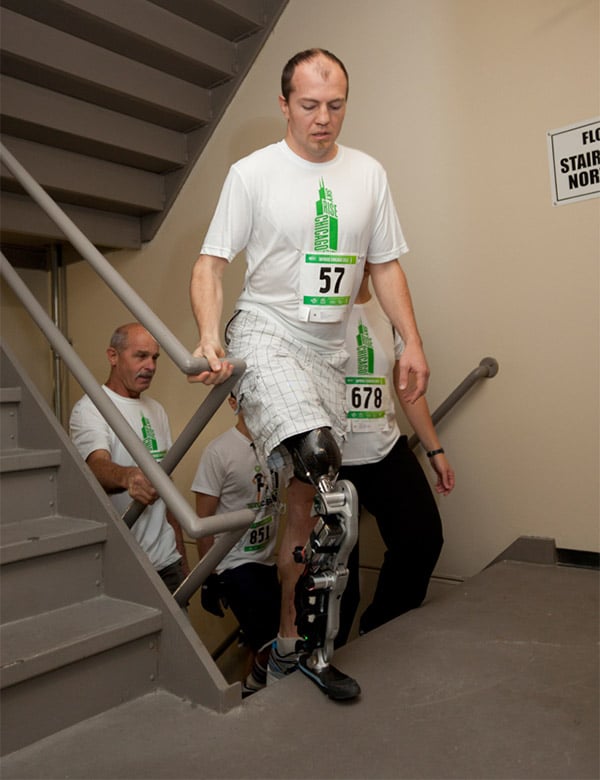 This past Sunday, 31-year-old Zac Vawter made history by climbing countless stairs inside the iconic Chicago skyscraper, all with the help of this incredible bionic leg. This mechanical and technological marvel is controlled by Vawter’s own neurons, and was developed by the Rehabilitation Institute’s Center for Bionic Medicine, and partially-funded by the U.S. Department of Defense. You can see Zac and his amazing bionic leg in action in the video clip below:

The leg actually interacts with Zac’s nerve impulses, allowing him to climb stairs much more easily than he could with an ordinary prosthetic leg. Vawter lost his leg after a motorcycle accident back in 2009, and his trial of the leg will help him and potentially many others with disabilities to walk again.