CIROS Robot Makes a Salad, Promises Not to Stab You

I know that many of us have dreamed about the day when a robot that could cook a meal for us, despite the fact that it requires a robot to handle a knife or other deadly kitchen implements. Your salad days aren’t over – but salad is made painfully slow – and potentially dangerous – when a robot prepares it. 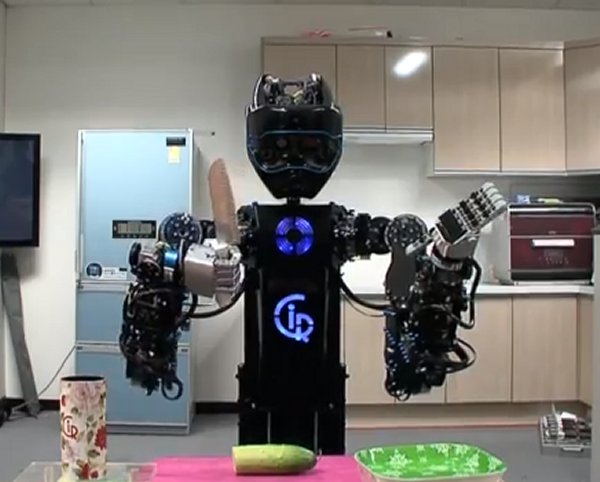 The Korean Institute of Science and Technology recently unveiled CIROS, a robot that will do a bunch of your housework and even fix you a salad – using a knife. That part cannot be overstated. If you live through its knife-wielding, you will have a salad. On the other hand, if it chooses to, it could just kill you dead and sprinkle the salad, along with some nice dressing, on your corpse… or sprinkle your blood on the salad.

When it’s not threatening you with a knife, CIROS can grab items from the refrigerator, serve tea, scrub dishes and slice vegetables. The stereoscopic cameras and 3D IR sensor help it recognize objects like microwaves, sinks, refrigerators and dishwashers so that it can do the jobs that you don’t want. Again, sometimes with a knife.