Nintendo Unboxes its Own Wii U

The new Nintendo Wii U is coming to stores in North America on November 18th, but you can see exactly what you’ll be getting in the box thanks to the fine folks at Nintendo, who have decided to shoot their own early unboxing video, with Nintendo president Satoru Iwata doing the honors. 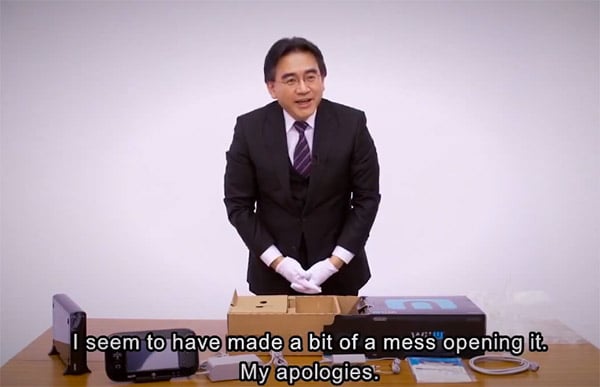 The video is in Japanese, but has subtitles, and is easy to follow. It’s pretty crazy that the controller is almost as big as the console, and the power brick is still quite chunky as well. It sure would be nice if they could get the size down. Apple has proven it’s possible with the MacBook’s power supply, as has Asus, so why can’t everyone?

My favorite part of the video is the rubber gloves Iwata is wearing while unboxing the shiny black game system. Clearly, it’s gonna be a major fingerprint magnet – especially the controller. I wonder if they include a pair of gloves in the box.