When you think of the way a tank moves around, the main attribute that comes to mind is the wheel-driven treads we’re all used to seeing. But imagine if tank technology had gone this way. 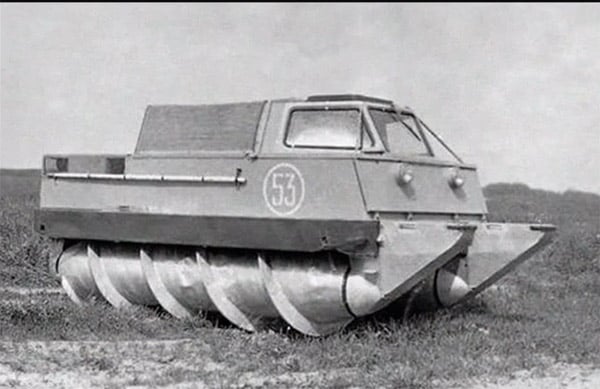 Instead of treads, these insane looking Russian tanks used giant corkscrews to move across the ground. Here’s some old footage of one of these vehicles in action:

Apparently, even Chrysler considered building screw-drive military vehicles, as you can see in this 1960s prototype footage of an unusual amphibious corkscrew-drive vehicle.

And back in the 1920s there was even a screw-drive tractor, designed for quickly navigating over snow, called the Fordson Snow Machine:

While the drill-like conveyances sure looked imposing, they ultimately failed because of their heavy weight, poor suspension, and nearly impossible steering. Oh, and they pretty much destroyed any lawn you drove them over.

While you’ll probably never get to drive in a corkscrew vehicle, you can still buy a remote-controlled one from Hot Wheels.