Dad Gives Daughter a Wind Waker Hacked to Make Link a Girl: The Legend of Zeldo

Mike Hoye has recently been playing The Legend of Zelda: Wind Waker with his 3-year-old daughter Maya. He read the narration on screen to her, but because he wants Maya to be the hero, he changed all the nouns and pronouns that refer to Link to female ones. One day he got tired of editing on the fly, so he hacked the game’s actual display text instead. 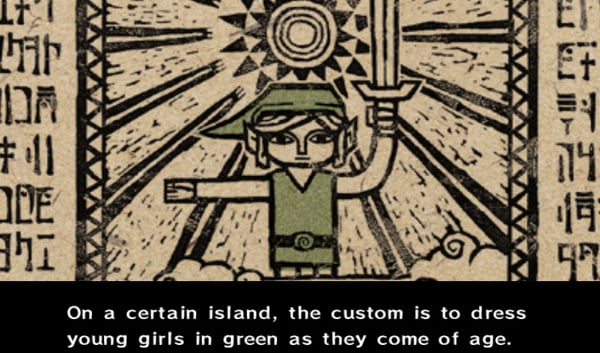 Hoye used a hex editor and manually searched and changed for all of the nouns and pronouns in the game, converting “he” to “she”, replacing “master” and “my lad” with “milady” and more. He talks about the process briefly on his blog. The hack is not for newbies – you’ll need to tinker with binary files in order to apply the patch to a disk image of Wind Waker, which you can then play using the Dolphin emulator.

What Hoye did may sound more tedious than just swapping words on the fly, but this story is not just about the hack. It’s about a parent’s love and a commentary on gender representation in video games. I highly suggest you read Ars Technica’s article on Hoye’s pronoun patch.