It’s not like I live out in the sticks or anything, I’m only a few miles outside of a city of well over 100,000 people. However, I’m stuck with one DSL provider with 5 Mbps download and a scant 0.73 Mbps upload speed for $70 a month. Now, Google has gone and made me so jealous of its Google Fiber service that went live this week in Kansas City that I can hardly stand it. 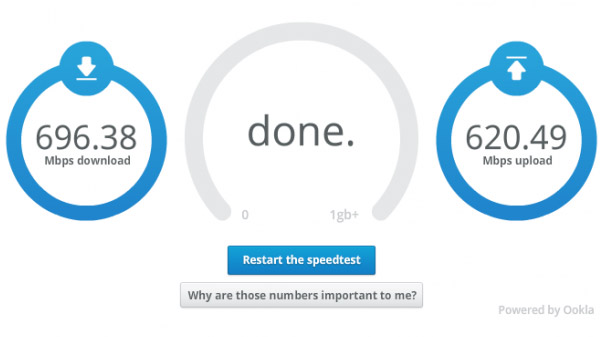 A Google Fiber subscriber named Mike Demarais ran a speed test on his blazing fast new web connection the second it was live and racked up some very impressive numbers – though lower than the service’s theoretical top speed of 1 Gbps. He recorded a download speed of 696.38 Mbps and upload speed of 620.49 Mbps. Granted those speeds could go down as more users are on the service, but still that is insanely fast for $70 a month. In addition, speeds drop down to about 200Mbps over a Wi-Fi network, which is still plenty fast for most things.