One of the most irritating things about Apple moving from its tried-and-true 30-pin connector to the new Lightning connector is that people are being forced to buy new accessories. Accessories that use the tiny new 8-pin connector have been slow to hit the market, but JBL has announced two new audio products that are aimed at the iPhone 5, 5th-gen iPod Touch and other Apple gadgets that use the new Lightning connector. 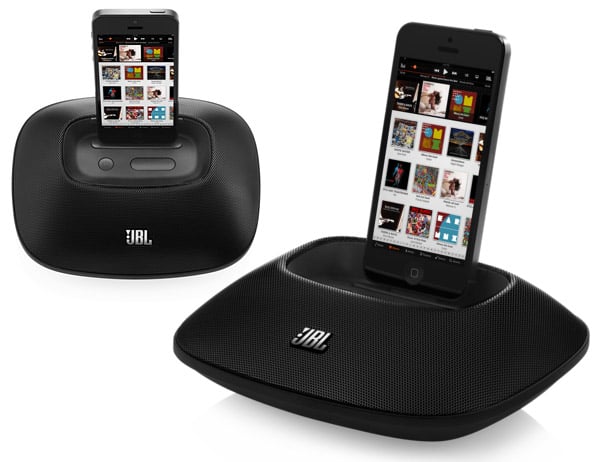 The OnBeat Micro and the OnBeat Venue LT speaker docks are the first on the market to use the new Lightning connector interface. The Micro is a battery-powered mobile speaker dock that also has a USB port for connecting older Apple devices as well as a 3.5mm audio input. The internal battery is good for up to five hours of playback and charges via an included AC adapter. Its two small full-range drivers are powered by a 2W-per-channel amp.

The Venue LT is a larger dock designed to be used in the home or office that connects to iPhones using Bluetooth and has its own Lightning connector for charging the iPhone 5, and the latest iPod nano and touch as well. It has a 15W x 2 amplifier, and a pair of full-range speakers.

Both devices work with the JBL MusicFlow app for viewing album art, changing tracks, and adjusting volume. The Micro retails for $99(USD) and the Venue LT sells for $199.