Honda’s HEARBO Robot Listens Better Than Most of Us

While more and more devices are beginning to be able to understand what we’re saying, one problem that we face is that not everything that we communicate is in the form of a verbal cue. With that in mind, the roboticists at the Honda Research Institute have been working on a robot that can not only understand words, but other sounds. 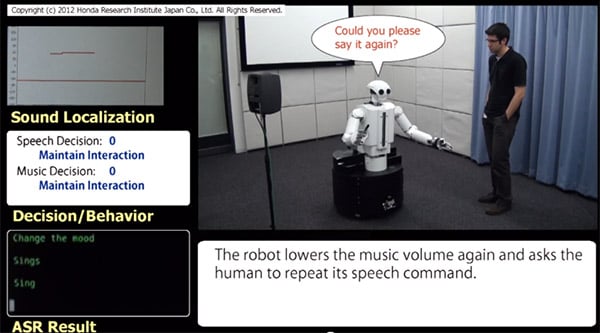 HEARBO (the HEAR-ing roBOt) uses a technology called Computational Auditory Scene Analysis to distinguish various sounds from its environment. This allows it to not just pick out verbal communication, but everything from the beep of an alarm clock to the mailman knocking on your front door. It can then use this information to make decisions about what to do.

The specific version of the technology being used for HEARBO is called HARK, an open source library that breaks down the understanding of sounds into three steps: localization, separation and recognition. This allows it to not only distinguish sounds in a noisy location, but exactly where they are coming from. In fact, the technology can nail down the direction that sound is coming from down to 1 degree of accuracy. Currently, the system can distinguish up to four different sounds going on at once, but in theory more microphones could allow it to handle even more sources.

Here’s a short demonstration video showing how the robot can understand what’s going on despite the world’s most annoying alarm clock going off the whole time:

And here’s an example of HEARBO easily distinguishing music from human commands, identifying song attributes, and even dancing a little bit:

So why develop such a robot? The technology could be used for things like robot butlers that could automatically answer the doorbell, or do things like turn off the TV if the kids have been using it for too long.