Macintosh Portable Hackintosh: Mac OS X on a PC Dressed as a Mac

The Macintosh Portable was Apple’s first battery-powered portable computer. Released in 1989, it weighed 16lbs., had a 16MHz CPU, a black and white screen and lead-acid batteries, hence its nickname, “Macintosh Luggable.” People had to pay $6,500 for the curse of owning this darned thing. Which is why I find this hack to be so funny. 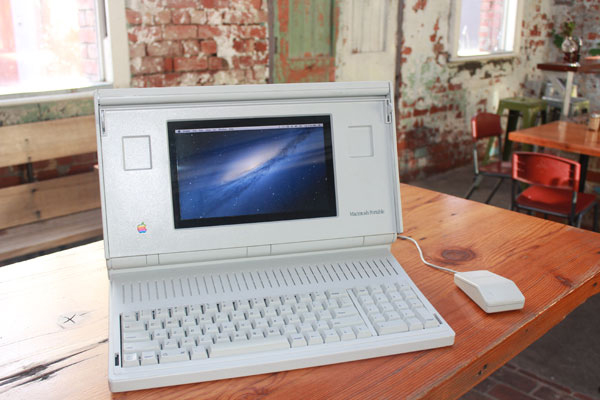 Yes, that Macintosh Portable has a color screen and is running Mac OS X. Patrick Blampied used the hardware from his old Toshiba NB100 netbook to make this modern miracle possible. In other words, it’s a Hackintosh. Blampied also painstakingly rewired and soldered a Dell keyboard to a USB controller for this project. The classic Apple mouse has an optical mouse in its guts, though it still only has one button. Finally, in place of the lead-acid batteries Blampied put the battery from a cordless drill.

The only thing this computer has over Apple’s current lineup is that sweet rainbow logo. Blampied said he’ll upload more pictures and information about his hack on his blog.