If someone on your Christmas list is interested in the Nintendo Wii, you might want to hold off purchasing for a few more weeks. A new “mini” version of the Nintendo Wii console has leaked via the Best Buy Canada website home page. There are no hard details on the console and only a small image on the sites homepage. 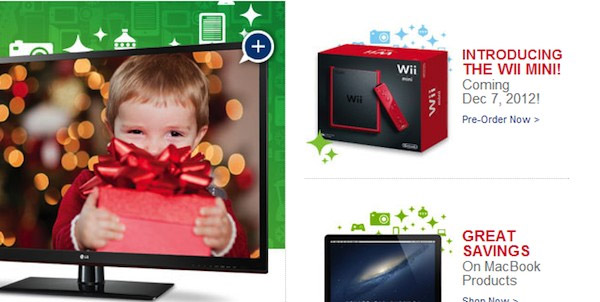 That little image shows a red Nintendo Wii Mini game console along with the date December 7, 2012 for launch. It looks like the square console is roughly the length of a Nintendo Wii remote on each side, and the version shown has a black case with red trim. The home page says you can pre-order the console now, but if you click the link it goes to a generic list of Nintendo Wii hardware and accessories. The Nintendo Wii Mini was nowhere to be found.

It really wouldn’t be a surprise to see Nintendo shrink down the original Wii console in an attempt to get people to buy a second console to replace the original, as well as to decrease manufacturing costs, a practice more commonly seen from Sony with their PlayStation line.