There’s more than a few unkind words to be said about Apple’s decision to boot out Google Maps and use their own, hobbled version instead. Didn’t someone just get fired over this? That being said, I wonder if Bilbo Baggins had used an iPhone 5 and iOS 6 Maps, would he have gotten completely lost? The guys over at Bullz-Eye wondered the same, and came up with this approximation of what his journey might have looked like. 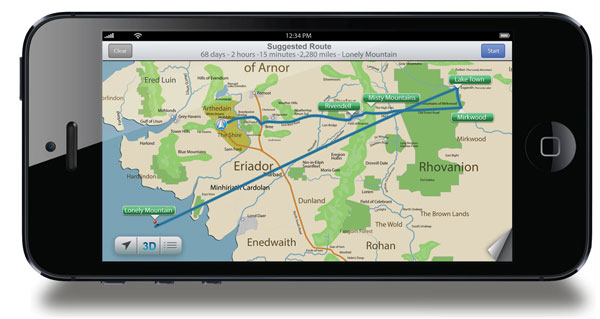 Just like many people, I’m pretty sure that he might have gotten lost using iOS 6 Maps, going many days out of the way on his trek to Lonely Mountain. Unfortunately, Google Maps hasn’t yet released their anticipated iOS app yet, so unless Bilbo has an Android phone, he’s out of luck for now.

It does make you think about when was the last time you pulled out a paper map. Smartphone and car GPS maps are way more convenient to use, and even if you get lost, you can find your way back pretty quickly. Unless it happens to be one of these places.