iKazoo Aims to Be the Swiss Army Knife of Controllers

I’ve seen some unusual gadgets over the years, but the iKazoo might be one of the most offbeat, yet intriguing devices I’ve seen in a while.

Designed by ogaco, the iKazoo is first and foremost a wireless controller which can be used for playing music with your iOS or Android device. It’s got a lip sensor, a full chromatic keyboard and even a flute built into it. But the device aspires to be much more than a virtual wind instrument, as it can not only detect touch and breath, but movement. This opens the controller up to other sorts of interactions, such as using it as a paintbrush, on-screen navigation or for controlling games. 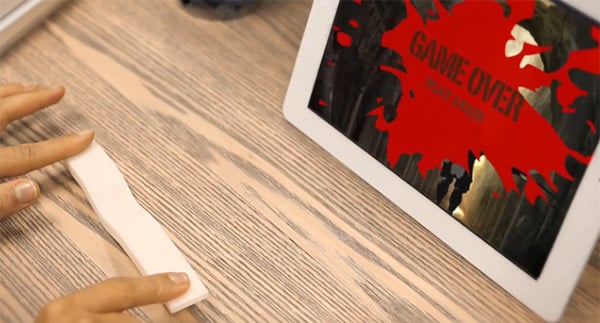 When used for gaming, it can be used as a sort of joystick, or also as a unique control method for games that involve balancing objects, or spinning a wheel. Its makers envision a plethora of other uses ranging from a motion control for golf and tennis games to a personal fitness tracker to a voice recorder and even as a karaoke machine.

Inside the stick-like iKazoo is a sophisticated set of circuits including an Ardiuno compatible microcontroller, Bluetooth wireless networking, optical, shock and motion sensors, as well as a microphone, multitouch sensor, RGB LEDs and even a headphone jack. It sounds sort of like a Wii Remote on steroids.

While the promotional video for the iKazoo is a bit silly at times (gotta love the part with the guy looking through the microscope,) I can really see potential here. A wireless controller with so much functionality along with an Open Source development platform could be a dream for hackers and tinkerers, much like the Wii-mote and Kinect have been. At this point it appears that the iKazoo is in the prototype stages, but the company is already registering interest for preorders for the strange little gadget.