Humans are always trying to push the boundaries and extend technology, even in places where they don’t belong and to species who shouldn’t have to deal with them in the first place. Case in point: Lars and his fox texting experiment. 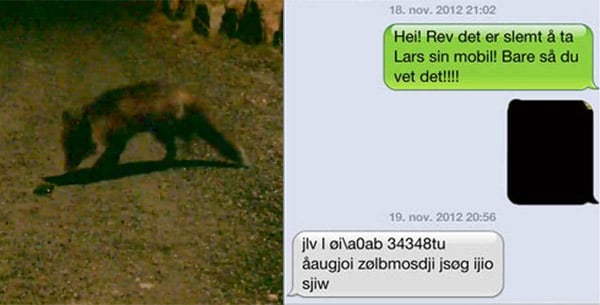 What Norwegian teenager Lars Andreas Bjercke did was download an app that imitated the sound of rabbits in order to attract foxes. Then he left the phone in his yard and let the app do all the work. Sure enough, a fox came around and kept circling the phone for a couple of nights. Eventually, he made off the phone – presumably, never to be seen or heard from again.

But here’s the thing. Lars called the phone later and surprisingly, the fox picked up.

“There was a crackling sound and some noise,” Lars told Verdens Gang.

It gets even weirder, because aside from taking calls, the fox apparently knows how to send messages too.

The next day, Lars’s friend wondered why he had sent him the odd text message. The message was in strange letters and numbers. Lars knew that the sender was the fox.