Last summer we talked briefly about an interesting Archos Android-powered tablet called the GamePad. The device is a seven-inch tablet that has gaming controls on each side allowing you to get your Android gaming fix on the go with physical controls. If you live in Europe, the good news is that you can now purchase the tablet. 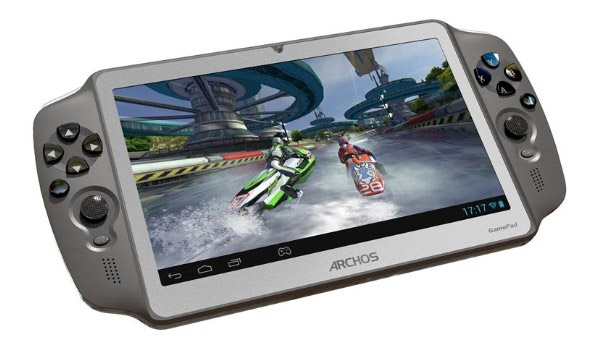 The Android 4.1-powered tablet has a 7-inch screen that supports five-points of capacitive touch, as well as two analog thumbsticks, 12 face buttons, and 2 shoulder buttons. Screen resolution is 1024 x 600, and the tablet is impressively thin at 10 mm thick and weighs 330 g. The GamePad also ships with unique mapping software that allows users to map the physical controls to the touchscreen controls of games on the market. The tablet also features 8 GB of internal storage (expandable with up to a 64GB microSD card) a 1.6 GHz dual core processor, and a speedy quad-core ARM Mali-400 GPU. It’s also got an HDMI port so you can hook it up to your TV.

European Android gamers can now pick the tablet up for €149.99 (~$195 USD). Sadly, for gaming fans in North America, the GamePad won’t launch until early Q1 of 2013. For more details, head on over to the Archos website.