BirdBuggy Lets Lazy Parrot Get Around

The Internets is currently amused-shocked-enraged-leaving enlightening comments about dogs that have been taught to drive. I think it’s time we show some love to Pepper the parrot and his one-of-a-kind ride, the BirdBuggy. 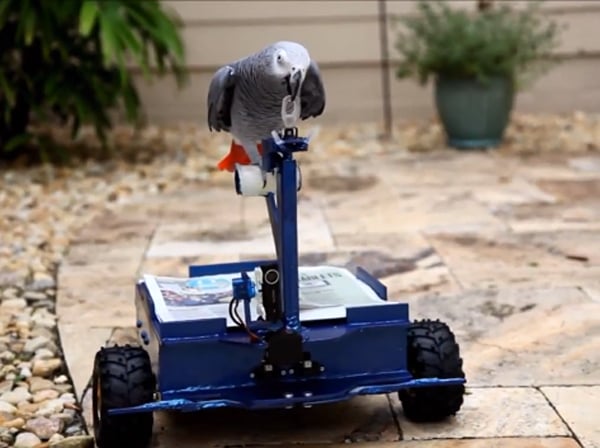 The BirdBuggy was made by University of Florida student Andrew Gray. It has a joystick that Pepper can move with his beak, propelling him along the sidewalk.

I’m not sure if Pepper is entirely sure of what he’s doing; fortunately Gray installed a couple of safety measures on the BirdBuggy. The thin lines in front of each front wheel are bump sensors. If they hit something, the vehicle will quickly back away. There’s also an infrared sensor up front; if BirdBuggy detects an obstacle, it won’t move forward even if Pepper pecks the joystick to death. Finally, the BirdBuggy can dock on it’s own, using its camera and a color-coded base station as its guide.

Maybe the perch should be mounted sideways so Pepper can keep his eye on the road.