If you’re a European owner of the new Nintendo Wii U game console, you may have noticed some odd limitations in the eShop for downloading digital content. If you happen to try and purchase any game content that’s rated for 18 years and over during daytime hours, you may have noted a message telling you that you can’t view this content. Nintendo has stepped up and offered some details on why this is happening. 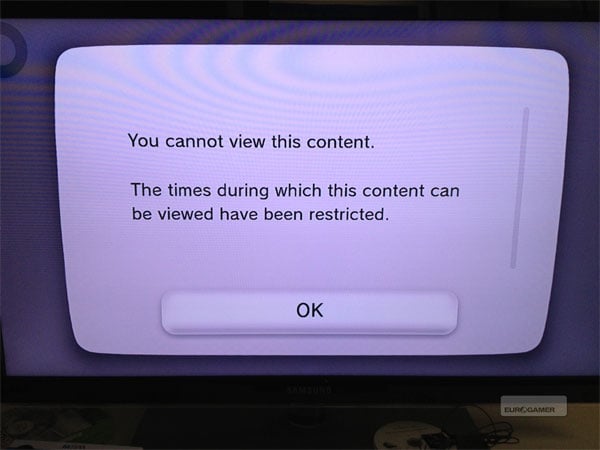 Nintendo Europe is based in Germany and German law restricts when content considered to be for mature audiences can be sold. German law only allows content rated for users over 18 years old to be sold during very limited late-night hours. For Germany, which is governed by USK ratings, sales are limited to 10pm to 4am Central European Time, and for countries governed by PEGI ratings, 18+ content can only be sold between the hours of 11 PM and 3 AM. I’d wager this rule was originally envisioned for pornography.

Since Nintendo’s European operations are based in Germany, the company has to follow these regulations for all of Europe. That means you can’t decide on a whim to buy Assassin’s Creed 3 or ZombiU in the middle of the day. If you’re hoping these content restrictions will be lifted, it seems that would require a change to German law – or Nintendo to move its European headquarters – so that probably won’t be coming any time soon.