Earlier this year we were treated to a funny hoax involving a quadcopter that was supposedly designed to deliver tacos. But don’t let that joke make you think that Mexican food and high tech aerial vehicles don’t mix. Because the Burrito Bomber is here. And yes, it actually works. 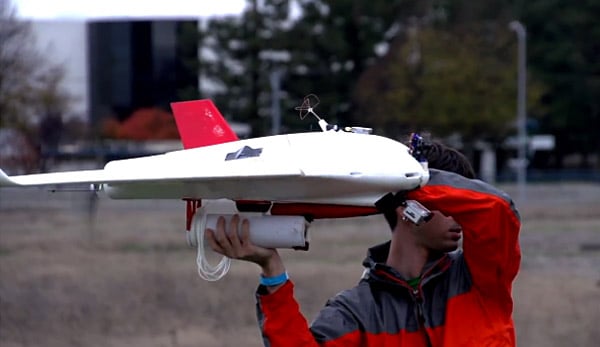 The delivery system was made by Darwin Aerospace using a mixture of off-the-shelf parts, open source software and 3D printing technology. The drone is a modified Skywalker X-8 running on Ardupilot. It delivers its tasty payload using a modified Quanum RTR, a remote-controlled toy bomb for hobby planes. The canister for the burrito is Darwin Aerospace’s custom design and was 3D printed.

So how does it work? Hungry infantry place their order on a smartphone via a custom web app. The order is sent to the drone along with the smartphone’s coordinates. The drone then flies to the location on its own and drops the canister, which safely parachutes down. It’s payload then explodes in your mouth, not on the battlefield.

The drone can also be controlled manually, so it can evade attacks from rival fast food chains. Seriously though Darwin Aerospace itself admitted that current FAA rules make an actual Burrito Bomber service illegal, but the fact that this thing even exists is good enough for me. Besides, can you imagine how chaotic our skies would be if all fast food was delivered this way?