Future tech is, for the most part, useful and innovative. However, a patent for some futuristic handcuffs seems more scary than fun, although it is still pretty innovative. 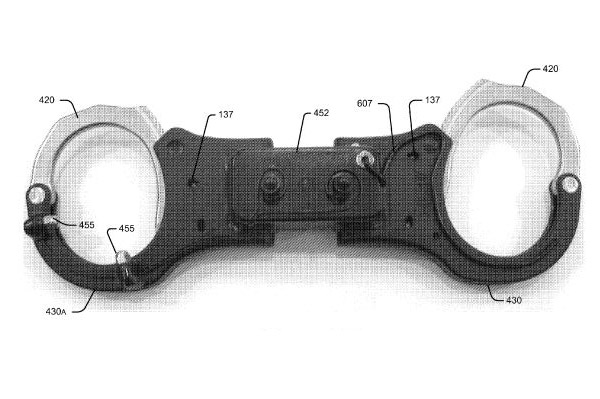 They look like the handcuffs we have today, but with two marked differences. First, it can shock the wearer electrically – perhaps when they misbehave? Second, it comes installed with a substance delivery system that can be used to inject the detainee with substances to achieve ‘any desired result.’
Don’t tell me that doesn’t scare you.

The design was revealed in a patent the Apparatus and System for Augmented Detainee Restraint, and it was filed by Scottsdale Inventions. The patent explains that the cuffs have been ‘configured to administer electrical shocks when certain predetermined conditions occur.’ The shocks are ‘activated by internal control systems or by external controllers that transmit activation signals to the restraining device.’

As for the injecting part, substances that are in the form of ‘a liquid, a gas, a dye, an irritant, a medication, a sedative, a transdermal medication or transdermal enhancers such as dimethyl sulfoxide, a chemical restraint, a paralytic, a medication prescribed to the detainee, and combinations thereof’ can be administered. Yes, you didn’t read that wrong; they really included ‘paralytic’ in that long list.

[Patent Bolt via Gizmodo via C|NET]