Don’t worry animal lovers. The Cat Car is nowhere near as creepy as the taxidermy cat quadcopter. Invented by Sam Brenner, the Cat Car is a harness that trades the proverbial carrot on a stick with the feline equivalent: a laser pointer. The idea is to “drive” the cat by letting it chase the laser pointer. 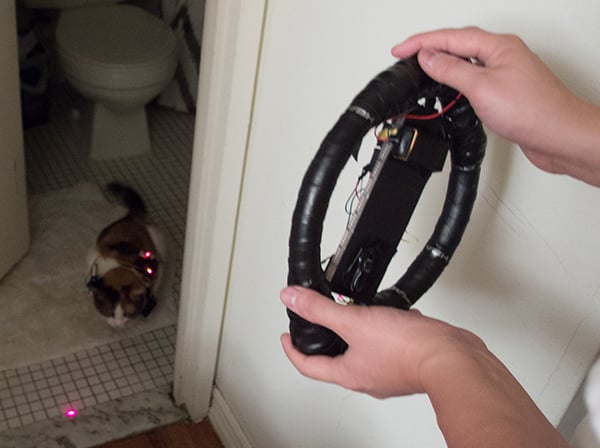 The laser pointer on the harness is attached to a servo. Sam built a custom steering wheel-shaped controller using an Arduino, a combination gyroscope/accelerometer and a wireless antenna. Sam also pulled of some coding magic to enable the hardware to work. In theory at least: the servo and thus the laser pointer moves in the same direction as the tilt of the steering wheel. Whether or not the cat chases after the laser pointer is another matter altogether.

He should try it on a baby. In a controlled environment of course. With a camera.