A couple days ago, I mentioned that NASA was planning to crash its Twin GRAIL spacecraft into the surface of the moon. What we didn’t know at the time that NASA was going to dub the impact location on the moon’s surface the Sally K. Ride Impact Site, in honor of the astronaut who passed away from cancer earlier this year. 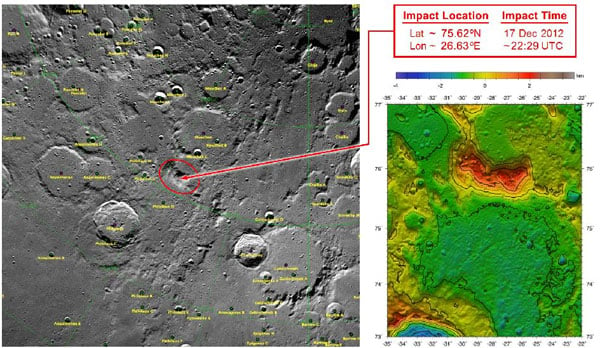 NASA reports hat last Friday the twin GRAIL spacecraft Ebb and Flow were commanded to descend into a lower orbit that resulted in an impact on Monday near the moon’s North Pole. The impact site was located on the southern face of a mountain that is 1.5 miles tall near a moon crater named Goldschmidt.

The spacecraft crashed into the surface of the moon at 5:28 PM EST at a speed of 3760 mph. NASA says that the spacecraft fired its engines for 50 minutes prior to impact until the propellant was depleted. The maneuver was designed to help determine exactly how much fuel was left in the tanks of the spacecraft and to help NASA engineers validate computer models to help improve predictions of fuel needs for future space missions.

According to mission team, much of the material that was inside the spacecraft was broken up during impact and any material that remains will be buried in shallow craters. The NASA Lunar Reconnaissance Orbiter will return images of the impact area when it passes over the site in several weeks.