DIY Doctor Who TARDIS Model Actually Made Bigger on the Inside

Next to its modest exterior, the second most notable thing about the time and space machine in Doctor Who is that it’s way bigger on the inside. It’s relatively easy to make a model or even a life-sized replica of its facade, but a clever fellow has managed to make a tiny TARDIS that looks bigger on the inside. 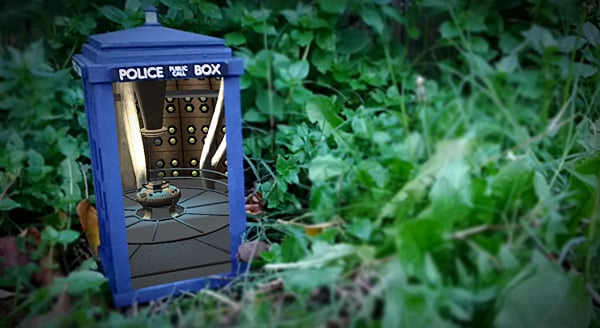 The replica was made by writer/DW fan/clever fellow Greg Kumparak. Initially he just wanted to make a small model of the TARDIS out of wood. After adding a working light on its roof, Greg thought he was really done with the project when an idea came to him: add an interior. Which is why he ended up not making an interior – at least, not a real one. I don’t want to spoil Greg’s neat handiwork, so just watch the video below to see what he did.

Teleport to Greg’s website for more details about his cool project.