I might be a little behind the times, but I just finished the campaign mode of Halo 4 over the holidays. For those of you who haven’t played the game yet, (minor spoiler ahead) Cortana has a little case of something called “rampancy” in which too much information loaded into her program causes her to destabilize and lose her mind. Now you can have a little of the same, when you down this special Cortana-themed cocktail. 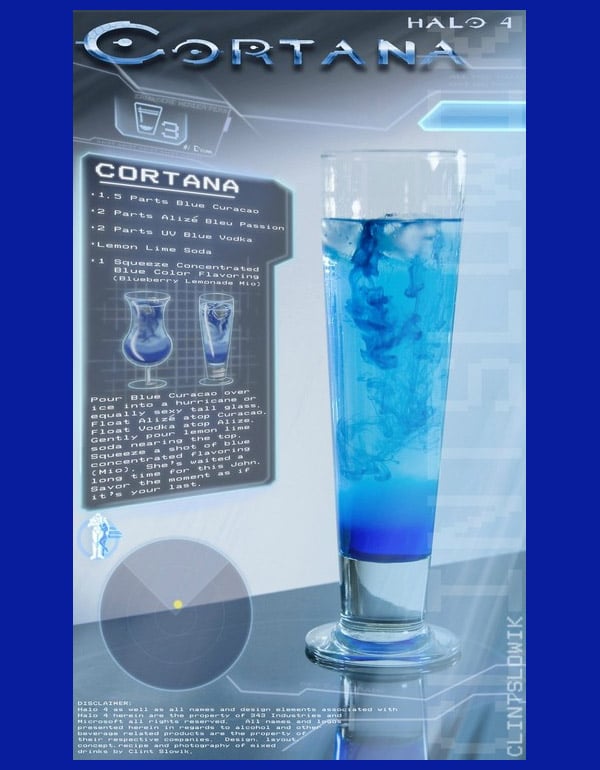 This delightfully blue drink is made up from Blue Curacao, Alize Bleu Passion, UV Blue Vodka, Blueberry Lemonade Mio, and a bit of Sprite or 7UP.  Here’s the full recipe:

Directions: Pour the Blue Curacao over ice into a hurricane or equally sexy tall glass. Float Alizé atop Curacao. Float vodka atop Alizé. Gently pour your lemon lime soda nearing the top. Squeeze a shot of blue concentrated flavoring (Mio). She’s waited a long time for this, John. Savor the moment as if it’s your last.

Between the vodka and the two other alcoholic ingredients, you definitely won’t be feeling any pain after a few of these. Though it might just affect your ability to effectively take down Covenant and Promethean warriors.

The Cortana Cocktail was made by Clint Slowik, and is featured up on The Drunken Moogle, where you can also find Clint’s other Halo concoction, the awesomely-colored Master Chief.