Tesla coils are one of scientists’ go to tool for making science appealing to kids. As if producing your own lightning wasn’t enough, tesla coils can also be used to produce music by pulsing its sparks at appropriate frequencies. You can do all that and more with the oneTesla DIY kit. Although you might not like the “more” part. 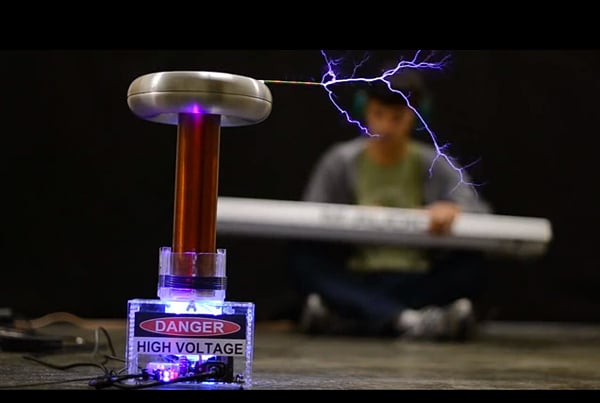 The oneTesla was conceptualized by Bayley Wang, Heidi Baumgartner and Daniel Kramnik. All three are members of MITERS, a student-run tinkering shop at MIT. Which brings us to the catch of oneTesla: you have to build it yourself. Even the inventors admit that it’s best left to people with advanced skills in soldering and electronics. But that’s partly the point of the kit. I’m sure you’ll learn a lot about electronics even if you just watch or assist in assembling the oneTesla. And once it’s built, you can do this:

Flight of the Bumblebee or Attack of the Mosquitoes? The oneTesla has been such a hit at Kickstarter that its cheaper pledges have already sold out; as of this writing you’ll have to pledge at least $299 (USD) to reserve a unit, and you’ll have to wait until May to receive yours. I say it’s worth it.