BROpener Turns Everything into a Bottle Opener

Most people are lazy by nature. They get even lazier on Friday and Saturday nights, since they’re all suddenly unable to leave their seats to open their bottles of soda or beer using the opener on the fridge. What they do instead is use the old edge-of-the-table trick to pop the cap off of their bottles. Good for them, but bad for you and your furniture.

This behavior gets even more common especially when you’re throwing a party or having a chill night with friends. Nobody really wants to be a party pooper by insisting that everyone get up to get their bottles open. The solution? The BROpener. 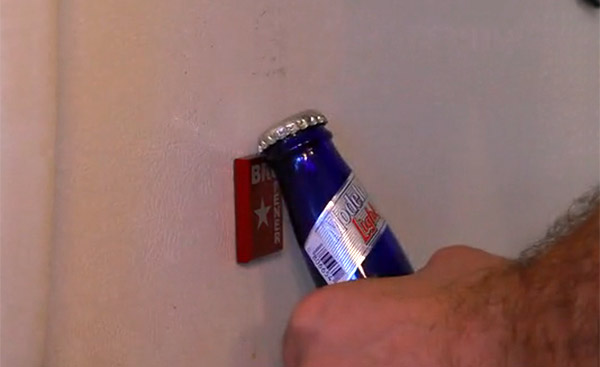 It’s a neat little strip that you can stick on tabletops and other furniture to transform them all into bottle openers. It’s got a space-age industrial-strength adhesive strip on the back to hold it in place. Basically, you’ll still be doing the edge-of-the-table technique on the BROpener, so your furniture stays protected, and the adhesive tape can easily be removed with a twisting motion.

It’s also magnetized, which adds a bit of convenience since your bottle caps will stick to it once the bottle’s open, so you won’t be dropping bottle caps all over the floor.

The BROpener is currently up for funding on Kickstarter, where a minimum pledge of $14(USD) will get you a single opener.