Now, Phillips has unveiled a new sound bar at CES that’s perfect for home theater fans that don’t have the room for a traditional surround sound speaker system, but would like surround when watching movies. 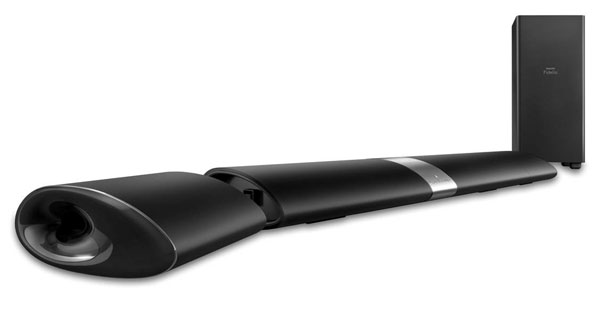 The sound bar is called the Philips Fidelio HTL9100 and it’s designed with removable rear channel speakers for true 5.1 surround sound. The best part about those removable speakers is that they are truly wireless. Not only does the sound bar beam the sound to the rear channel speakers with no wires, those rear speakers are also battery-powered. That means you don’t even need an AC outlet where you place the speakers when you want to listen to surround sound. The wireless speakers are good for 10 hours of use per charge and recharging means you need only connect them back to the sound bar.

This is a great idea for those of you who only need surround sound when watching the occasional movie or video game, with the speakers snapping neatly back into place when not in use.