Kingston HyperX Predator 1TB Flash Drive: You Don’t Want to Lose This One

Kingston just unveiled a technological marvel at CES 2013: a 1TB USB 3.0 flash drive. A terabyte on a stick. If you can make something as insane as that, then you deserve to name it whatever the hell you like, which is what exactly Kingston did. Behold: the 1TB Kingston DataTraveler HyperX Predator. I say the name doesn’t do it justice. 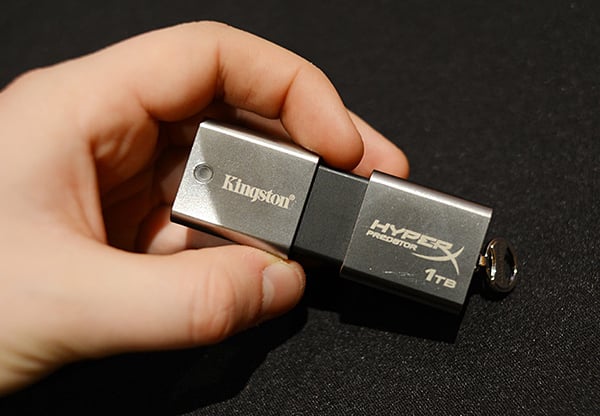 According to Kingston the flash drive can achieve 240MB/s read and 160MB/s write speeds on a USB 3.0 connection. Maximum PC got a look at the massive pocket drive on Kingston’s CES booth; skip to around 0:25 to see it.

Some of you may remember that Victorinox showed off a 1TB thumb drive as part of a Swiss army knife almost a year ago, but I don’t think it ever went on sale. As the Kingston rep said in the video, their 1TB flash drive should be out in a couple of months. You probably won’t be buying one though. Pocket-lint says it will cost a ridiculous $3,400 (USD). But I can believe that price tag, because the DataTraveler HyperX Predator that “only” has 512GB is already available and it lists at $1,750.