In the future, we may not have any problems with carrying even full-sized tablets in our pockets because they’ll be as portable as plain old paper, as shown in this prototype technology called PaperTab. It was developed by Intel, Plastic Logic and Queen’s University’s Human Media Lab. 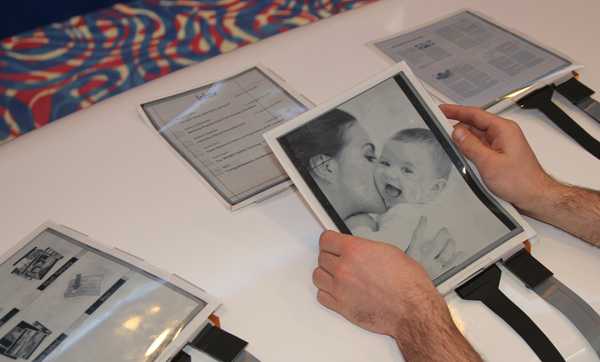 The PaperTab uses Plastic Logic’s flexible high-resolution 10.7″ electrostatic display, a flexible touchscreen and a Core i5 CPU. Like paper documents, PaperTab is meant to be used in groups. Each tablet is meant to run a single app, but users can also put multiple units together to form a big interactive display. Instead of just using gestures, users interact with the PaperTab by bending its portions. Transferring media and apps from one PaperTab to another is accomplished with a simple tap.

I wouldn’t be surprised if we actually end up with tablets this thin and bendy in the future. But I think having one app per device is a step backwards, and I wouldn’t want a permanently dog-eared and crumpled tablet. Then again the technology is in it’s very early stages so it’s too early to comment on its practicality anyway.