Millennium Falcon Mac and PC Computer in One

Wanna make the Kessel Run in record time, while surfing the internet at the same time? You’d better use this Millenium Falcon computer then. It was the grand prize winner in last year’s Deconstruct for GOOD event sponsored by Good Magazine and Vizio. 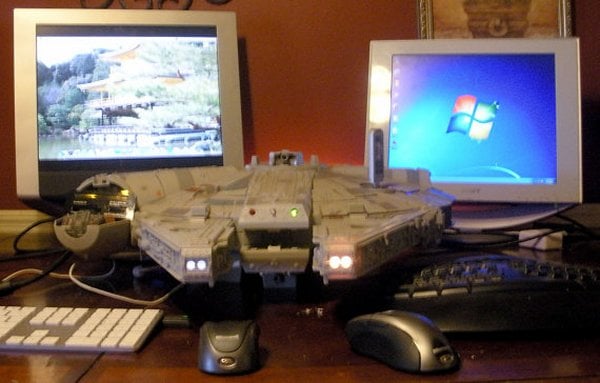 This Millennium Falcon has both a PC and a MAC inside. When you and your Wookiee co-pilot can’t agree on an operating system, use both. Builder Ken Swallow removed the insides of a model ship and replaced them with a Mac Titanium G4 motherboard and a MSI ATX motherboard (PC) while keeping the original sound effects from the toy intact.

He added fans, lights and power switches for both computers. So you have a full Windows 7 PC and MAC OSX 10.5.8 system, with Linksys wireless, an Apple airport card and more – all inside of a spaceship. Hyperspace on over to Etsy to get more specs, or buy it for $2,800(USD). If you can’t afford that, you can always borrow some credits from Jabba.