Because I grew up with video games, pixel art looks great to me whether it’s made of paint, thread or LEGO. But nothing makes pixel art pop more than its original medium: light. Case in point, this nifty interactive picture frame that is simply called PIXEL. 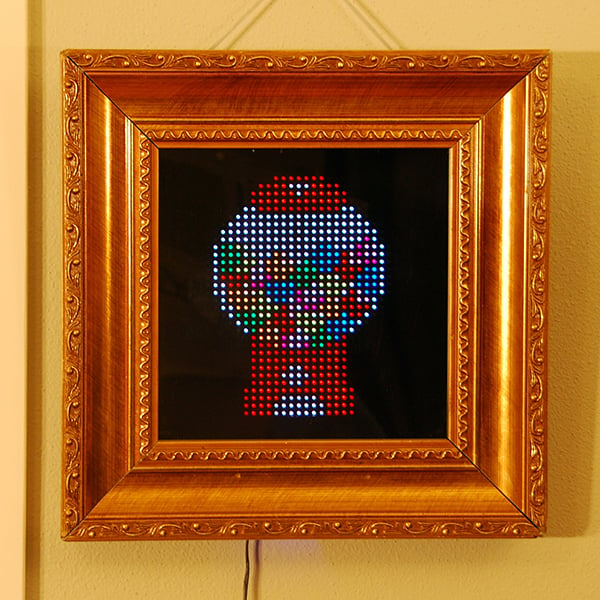 Invented by Al Linke, PIXEL is an LED display that shows pixel art images or animations. The default build of the PIXEL consists of a frame with 1,024 LEDs arranged in a 32 x 32 matrix, so it’s been designed to scale images or animations to 32 x 32. Linke partnered with several pixel artists to make art especially for PIXEL. They come in the form of free Android apps that you can use to beam the images or animations via Bluetooth. Yep, there’s currently no iOS app, which is unfortunate, but I wouldn’t be surprised if that changes soon.

PIXEL can also be used as a mirror when the LEDs are turned off. It also has a proximity sensor, which programmers can use to toggle or change the animation automatically.

You can reserve a ready-made PIXEL by pledging at least $229 on Kickstarter. PIXEL has been a huge success on the fundraising site. It’s already earned nearly $25,000 (USD) in pledges as of this writing, way more than the $8,000 target and with 48 days more to go.

Linke is also selling a parts kit with only 512 LEDs for the much lower price of $99, but Linke admits that the existing art was made only for the 1,024 LED version. Fortunately you can just create your own art and then send it to PIXEL via an Android device. Or you can just mount a CRT TV on your wall.