Crazyflie Nano Quadcopter Buzzes Its Way into Our Hearts

Since I already have an AR.Drone 2.0, I’m not really sure I need another quadrocopter. But that doesn’t mean I can’t want another quadcopter – especially one that I can fit in the palm of my hand. 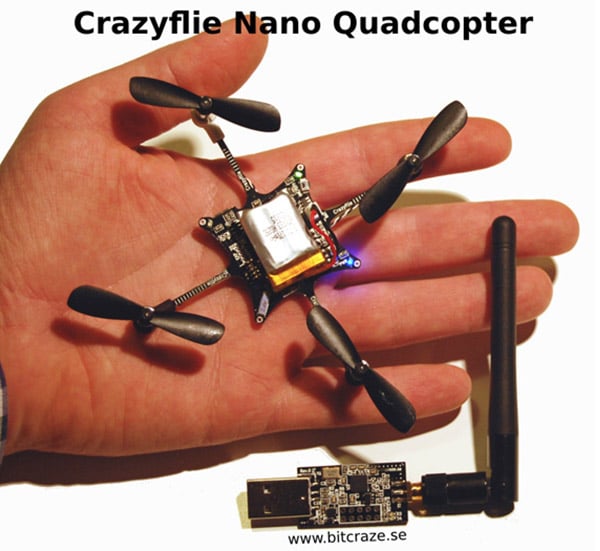 This awesome bit of tech is called the Crazyflie, and it’s a complete pocket-sized quadrotor. This little thing weights just 19 grams, and measures about 9cm x 9cm (~3.5″ square.) It can fly up to 7 minutes at a time on a 20 minute charge, and can even lift a miniscule payload of up to about 10 grams. Under its hood (if it had a hood), it sports a microcontroller, accelerometer, gyroscope, and a tiny 2.4GHz receiver for accepting commands from your computer or other wireless device.

It’s incredibly fast, agile and stable as you can see from the video clip below:

Sure, it sounds like a swarm of angry mosquitoes buzzing around, but that’s kind of what I love about it.

The tiny quadrotor is sold in kit form, and is completely open source, so you can create your own custom applications and modifications. Keep in mind that you’ll need soldering skills to assemble it, and its creators clearly state that this thing is not a kids toy. Though it might be one for us grown-ups.

You can pre-order a Crazyflie kit from now through February 18, with an estimated ship date of April 25. Prices start at $149 for the basic kit, and go up to $173 for the 10 DOF version, which has extra sensors fo altitude and heading measurements – though you’ll have to write your own code to take advantage of the added sensors.