Ambergris: Whale Vomit Could Pay off Your Mortgage

UK resident Ken Wilman was walking his dog on the beach near his home when his dog became very interested in a yellow rock lying on the beach. The man said he didn’t understand why exactly his dog was so excited about the large yellow stone, and noted that it smelled horrible. Not wanting a stinky yellow rock, Wilman left it on the beach and headed home. 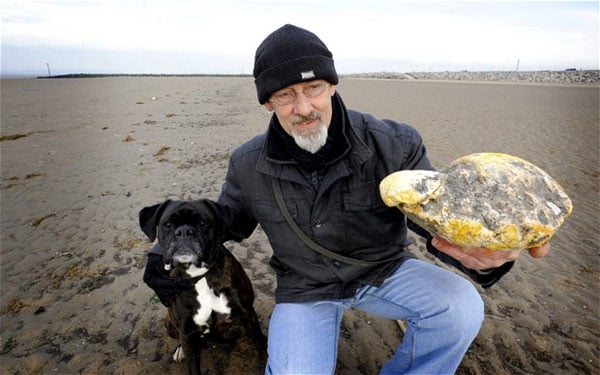 Once he got home curiosity got the better of him, and he ran an Internet search to figure out why the rock smelled so bad. It turns out the yellow stone wasn’t a stone at all. Rather, it was a 3 kg chunk of sperm whale puke. The official name for sperm whale vomit is ambergris, and as we previously learned – the stuff is incredibly valuable. Naturally, he rushed back to the beach to claim his yellow puke rock.

Wilman has already been offered €50,000 (~$68,000) for his chunk of vomit. However, if the piece sent offer testing verifies that it is in fact sperm whale ambergris, some estimate that the large chunk could be worth as much as $180,000.

If you can believe it, sperm whale vomit is commonly used in the perfume industry. Ambergris has been used in high-end perfumes such as Chanel No. 5. Now ladies, doesn’t that make you want to run out and buy some right now?