Are you unimpressed by the current crop of portable battery chargers on the market? Boy, you’re hard to impress. But even with your high standards, there’s a good chance you’ll be interested with the Epiphany OnE Puck. It doesn’t need electricity, light or salt water. All it needs is a hot or cold object, and it’ll pump out electricity in return. 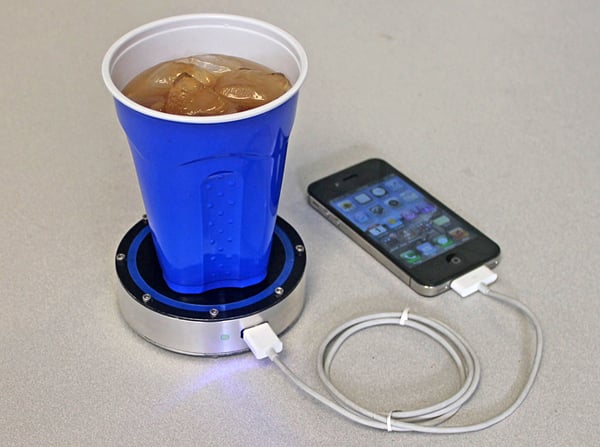 Epiphany Labs claims that its device is a Stirling engine, which works by cooling down fluid trapped inside it. In the process of cooling, some of the thermal energy from the heat source is eventually transformed into electric energy. The company didn’t go into details about the specific components of the OnE Puck, only that if you apply sufficient heat – say, from a cup of steaming hot coffee – on its red side or if you significantly cool down its blue side – as shown above – then it will be able to generate up to 5W of power, enough to charge most smartphones.

A pledge of at least $115 (USD) on Kickstarter lets you reserve your own OnE Puck. As of this writing, the fundraiser has already raised more than half of its $100,000 target with 55 days to go. But if I were you, you might want to wait until Epiphany Labs provides more details about the device before pledging. After all, they haven’t answered the most important questions: What are its minimum and maximum temperature tolerances? Can you hang it over a bonfire or place it in your freezer? And exactly how hot (or cold) does an object have to be to cause the device to generate enough charge? Can Lambert of Technabob get one for free? So many questions.