Hive-Minded Robots Swarm in the Water

We have robots that can swarm on land and in the air and now they have invaded swimming pools. These robotic boats from the University of Pennsylvania are pretty neat and kind of cute too. Each boat is named after periodic table elements. And they won’t try to drown us either – not for a while at least. 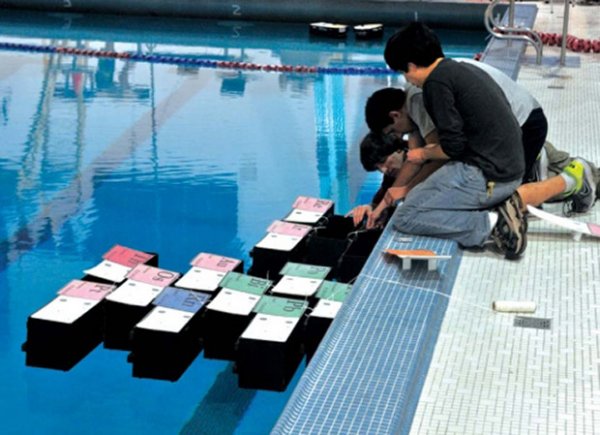 For this DARPA-sponsored project, engineers are trying to get this fleet of small robotic boats to cooperate to form useful structures that can withstand the movements of water, while being able to stiffen as needed to handle vehicular or other traffic. The university has over 100 of these prototype floating robots. They are each controlled by a tiny Gumstix Linux computer use four separate motors to enable omnidirectional movement and zero-radius turns.

This is useful for more than just playing in the pool. A swarm of these robo-boats could form bridges, runways, or even islands. Imagine what larger versions could do for rescuing people at sea or forming impromptu bridges so that people could evacuate during a terrible storm. They could even help to create an impromptu runway for delivery of supplies and transport of personnel.

You can see the robots in action in the video clip below:

[via The Daily Pennsylvanian via iEEE Spectrum]