I’m sure that chess has dozens – if not hundreds – of virtual versions that let people play against each other online. This project by YouTuber FunGowRightNow12 and his fellow students at Northeastern University also offers online multiplayer, but it’s not a videogame. It uses a couple of physical boards along with chess pieces that move on their own. 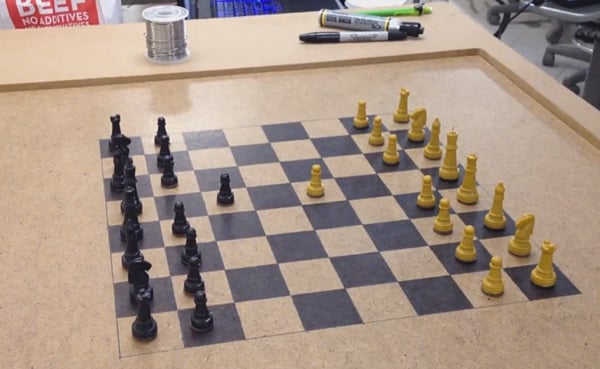 FunGowRightNow12 and his group-mates made the wireless chess boards for their senior project back in April 2012. The end result of the project is nothing short of magical: you move your chess piece, and the corresponding piece on your opponent’s board does the exact same move and vice versa. It even takes captured pieces out of the board for you. Since the commands are transferred via the Internet, you and your opponents could be anywhere across the globe and you’ll still be able to play with the pieces.

Sadly, FunGowRightNow12 didn’t go into details about the intricacies of their project aside from what he and his group-mates shared on Reddit, but they did post a couple of additional videos. This one shows what’s inside the board:

It looks like there’s a robotic X/Y arm with a retractable magnet on it for moving the pieces around, which is similar to how those Phantom Force computerized chess sets work. The big difference here is that you can play with another human on the other side of the world using this system.

The video below shows how the system handles less straightforward maneuvers such as castling and rescinding illegal moves. In the case of the latter, FunGowRightNow12 and his pals hooked up a computer with a program that determines what the valid moves are at the start of every turn. If it detects an illegal move, the turn will be suspended until the player makes a correct move. Only then will the turn be sent to the other board.