The Ethiopian Caterpillar – Robot Bug of the 19th Century

I’m always mesmerized by the intricate craftsmanship found in antique automatons. I think it’s something about the fact that people could build robotics without any electrical or electronic components that is truly amazing. One of the more incredible automatons to pop onto my radar screen of late is this mechanical caterpillar that dates back to 1820. 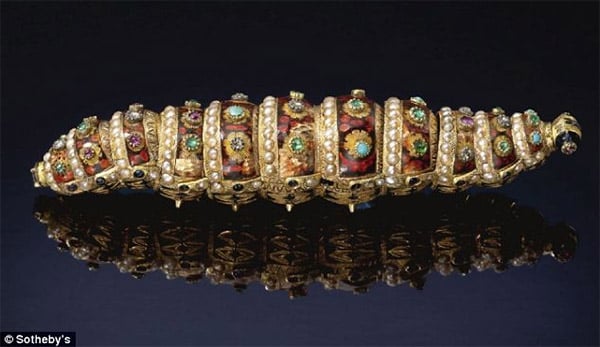 The Vers de Sois caterpillar was apparently created by Swiss clockmaker Henri Maillardet nearly 200 years ago. This detailed, jewel-encrusted caterpillar can actually crawl across a flat surface when wound up. Check it out in action:

Sure, it’s a bit noisy, but still impressive, no? Well, all of this incredible miniature automation doesn’t come cheap though. The Vers de Sois caterpillar recently sold at auction for over $415,000(USD). I think I’ll stick with my HexBugs for now.

[via Worldtempus via Neatorama via Richard Kadrey via Gizmodo]