Wearable mice have been done before, but Nick Mastandrea’s Mycestro might be the best implementation of the form factor yet. Like other wearable mice, Mycestro – it’s pronounced “mice-tro”, get it? – is designed to be worn on your index finger. But instead of a small trackpad, Mycetro lets you control your cursor by waving your finger around. 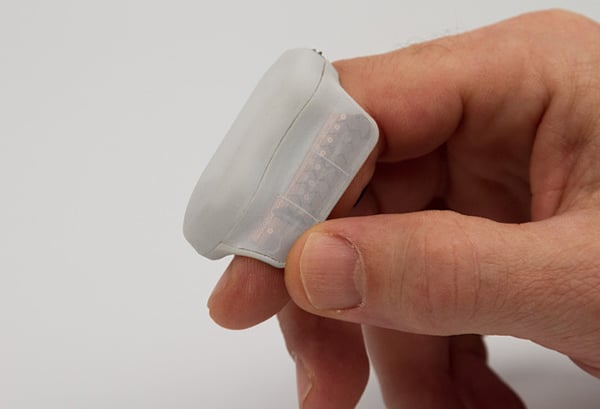 If it seems like a stupid idea to you, temper your cynicism. Mycestro can be calibrated and it’s sensitive enough to read even small movements. You don’t have to emulate an orchestra conductor to move your cursor around. Aside from tracking motion, the Mycetro also has touch-sensitive left-, right- and middle-click buttons. You can swipe your thumb along those three buttons to scroll up or down.

Mycestro is also designed to activate only when your thumb is touching it, so you don’t have to worry about your cursor running wild while you move your hand about. That smart feature should also help conserve its battery, which lasts up to 8 hours and can be recharged via USB.

The Mycestro can also be used with devices that support Bluetooth 4.0. Here’s a brief demo of the Mycestro being used to control an Internet-connected TV:

Here Nick shows how it can be used to control Solidworks CAD software.

Pledge at least $79 (USD) on Kickstarter to reserve a Mycestro. It seems like a decent alternative to the traditional mouse, but I am curious if the Leap sensor – which is cheaper yet more versatile than the Mycestro – will render it obsolete. Then again it is more portable and has its touch-sensitive hardware going for it.