A couple of years ago we learned about Plan.B, a concept for a map for blind people. The idea behind that system was sound, but I thought the execution left much to be desired. I like this other concept called Blind Maps much more. It’s supposed to be a Bluetooth add-on for the iPhone that provides Braille-like turn-by-turn navigation. 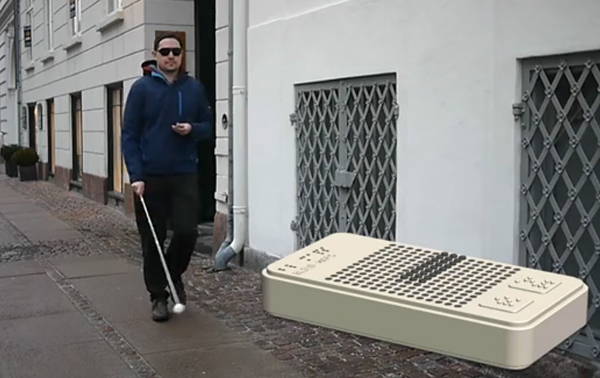 Blind Maps was conceptualized by Andrew Spitz, Ruben van der Vleuten and Markus Schmeiduch last year to fulfill a 36-hour project for a course that they took at the Copenhagen Institute of Interaction Design. Whereas Plan.B displays a mini-map of the user’s immediate surroundings, Blind Maps keeps things simple. To start off, the user speaks into his iPhone and asks for directions to a destination. Blind Maps would then tap into the data from a navigation app on the iPhone – e.g. Google Maps – to provide turn-by-turn navigation using dots that protrude from the device itself.

It looks a bit like the Snake game from the old Nokia phones, except this one controls you. I also like its crowdsourced aspect. It would not just help blind people be more independent but also enable blind people to help others with the same disability to be independent.