As we already know LEGO robots can do all sorts of things, both useful and useless. This particular build falls into that latter category – unless you consider solving the completing the silly Tamago Egg app to be a good expense of time and energy. 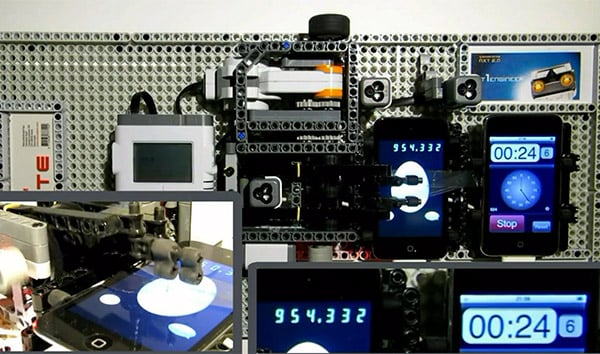 For those of you unfamiliar with Tamago, it’s a smartphone app that simply involves tapping on the screen in order to crack open a virtual egg and see what’s inside. Oh, did I happen to mention you need to tap it 1 million times? This sounds like a job for a robot!

That’s exactly what LEGO NXT builder Jan Gerritsen created with his motorized Mindstorms NXT contraption, designed with a single purpose – to endlessly tap on the screen of his smartphone so he can finally see what’s inside the egg. Here, check it out:

If that Britney/will.i.am jam has to be stuck in my head, you have to deal with it too. I like how there’s a second iPhone sitting there whose sole purpose is to time the other one.

Anyhow, according to Jan’s math, the generally useless ‘bot will need 37 hours to tap 1 million times, and crack open the Tamago Egg once and for all. It’s not quite done yet, but while we wait, Jan recommends that we drink beer and eat some M&Ms. I couldn’t agree with him more.