MYO Gesture Control Armband: The Force is with Us

The Leap motion sensor was one of the most talked about devices last year and rightly so. But until the device itself gets in the hands of ordinary folks, I think MYO just might steal the Leap’s thunder. MYO is also a gesture-based controller, but instead of using cameras, it senses the electrical activity in your muscles to help detect gestures. 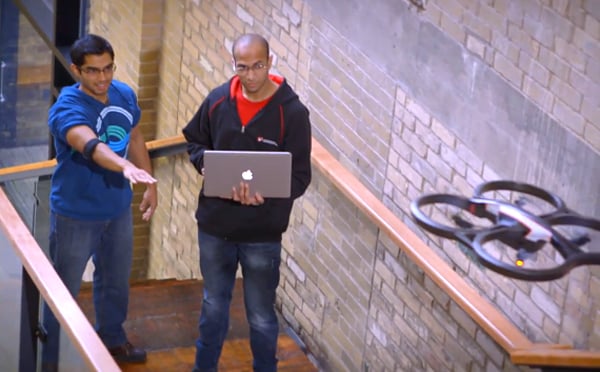 Aside from its proprietary muscle activity sensors, the MYO also has a six-axis intertial measurement unit, an ARM processor and rechargeable Li-ion batteries. It uses Bluetooth 4.0 to pair with devices. All of these hardware lead to a portable form, giving it a significant advantage over the Leap or the Kinect.

Thalmic Labs, the company behind MYO, claims that their device is accurate enough to recognize the movements of individual fingers. It also supposedly responds so quickly that sometimes “it even looks like the gesture is recognized before your hand starts moving”, thanks to the fact that it detects muscle movement and not just the actual gesture itself.

Amazingly, we can already pre-order this telekinesis-bestowing gadget. Head to MYO’s website and pay $149 (USD) (plus $10 shipping) to reserve your own unit. Thalmic Labs claims that orders will ship later this year, with out of the box support for PC and Mac computers as well as APIs for iOS and Android developers. I’m particularly interested in seeing how the MYO will work with home automation systems, electronic prosthetics and of course, cosplay.

[MYO via Man of Many & VentureBeat]