Aside from providing clean energy from a practically infinite power source, solar power now has another advantage over traditional power sources: it can be generated on nearly any surface. It’s all thanks these new solar panels that are thin and flexible enough that they can be attached like stickers. Let’s see you make a stick-on gas tank. 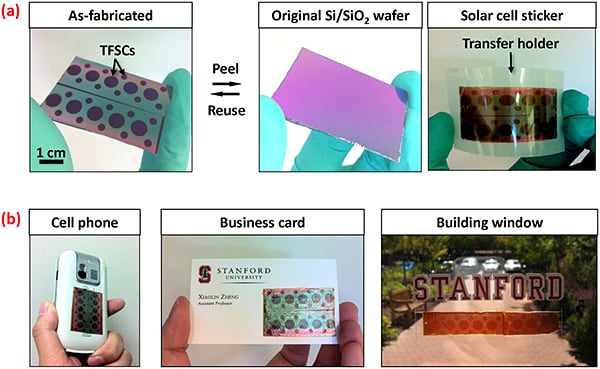 The peel-and-stick solar panel was invented by a group of researchers from Stanford University’s Mechanical Engineering department, led by Phd candidate Chi Hwan Lee. The researchers were able to fabricate the panels via “a unique silicon, silicon dioxide and metal “sandwich.”  Solar cells are deposited on a thin film of nickel that is in turn deposited on the aforementioned silicon/silicon dioxide (Si/SiO2) wafer. The researchers separate the resulting solar film from the wafer using thermal release tape. Finally the solar film is peeled off of the tape using water. The resulting solar film can now be attached to a variety of surfaces using ordinary adhesive such as double-sided tape.

We may not understand that process in its entirety, but I’m sure you’ll find the group’s other findings to be exciting. Not only did they make stick-on solar panels, they did so using existing machines and materials. Even more exciting is the fact that Chi Hwan Lee and his colleagues believe that the process can also be applied to other components, including printed circuits, transistors and even LCDs. This could go a long way into ensuring that the next Google Glass will be Google Gontact Glens. You get the idea.

[via Nature & Stanford Engineering via Springwise via Electric Power]