Want a Job? Send a 3D Model of Your Head Instead of a Resume

It seems like people are taking Phil Dubost’s lead when it comes to resumes. In case you haven’t heard of Phil, he’s the one behind the Amaz-ing Resume that promptly went viral after he posted it. Apparently, many seem to agree that a fake Amazon product page beats a boring old CV any day.

That was followed shortly by the chocolate bar resume of Redditor elilanger’s friend Nicholas, which went viral after it was posted online. (In case you were wondering, yes, he got the job.) Hot on the heels of both unusual resumes is Floyd Hayes and his 3D-printed head resume. 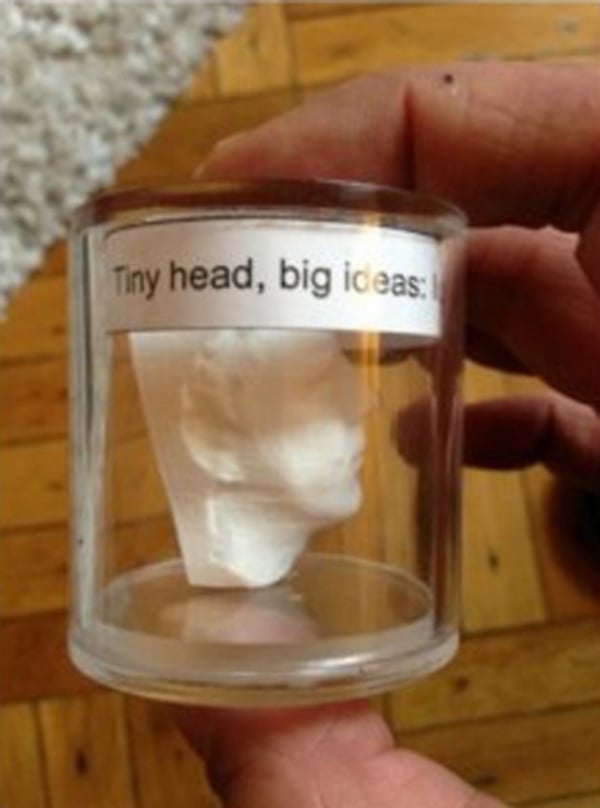 Scratch that, it’s not really a resume. It’s just a miniature model of his head with a piece of paper inside that said “Tiny Head, Big Ideas” – a sort of modern-day calling card. Floyd had his miniature heads printed out at a local Makerbot store and promptly sent them out to ten prospective employers. I’m assuming he sent out the heads with his contact information, for obvious reasons.

The 3D heads might seem a bit extreme, but it’s all in a day’s work (or all in day of job hunting) for Floyd, who used to specialize in non-traditional advertising for ad agency Cunning London. The heads aren’t just for Floyd either, since it’s also meant to attract prospective clients to his new consulting business that specializes in guerilla marketing. Now that’s killing two birds with one head.