Roll20 Online Tabletop Will Be a Critical Hit with Game Masters

It’s been at least a decade since I last played a tabletop RPG, so I wouldn’t be surprised if there are programs out there that augment players’ pens and papers with mice and keyboards. But here’s one that seems very easy to use. It’s called Roll20, a highly customizable web-based virtual tabletop. 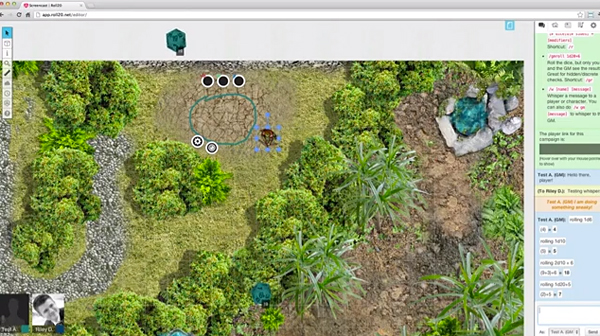 I think the best way to describe Roll20 is that it’s an image editor for dungeon masters with a video chat app added on to it. If that sounds intimidating, don’t be. Its tools are mostly straightforward and employ commonly used commands like copy, paste and drag-and-drop. It also has a built-in search engine for assets, so you can go in empty-handed, look for characters, maps and even soundtracks, then setup your play area, all from within the app. It also has a dice-rolling feature that can even show a 3D dice onscreen to all of your party members. Don’t have any tabletop playmates? Don’t worry – Roll20 lets you join public games! How awesome is that? Watch the overview to get a better idea of what you can do with Roll20:

The best thing about Roll20 is that it’s free. The group behind it makes money by selling premium assets like character art and maps, which is entirely optional especially if your DM is awesome enough to make custom art for your adventures. Sign up at the Roll20 website and start building the adventure of your dreams. And your friends’ nightmares.