Man, this is some bad news for EA and Maxis. Yesterday afternoon, Amazon temporarily stopped selling download copies of SimCity. Yes, the version that was just released this week. The game has already received over 1800 reviews on Amazon. The problem is that it has an average rating of just one star. 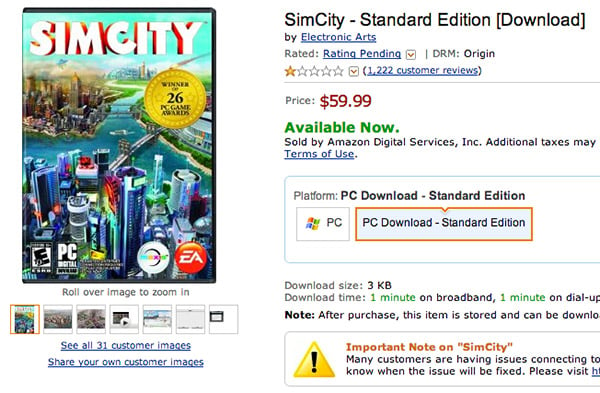 That’s because the majority of of those are one star reviews. Looks like only a handful of people gave the game more stars. I’d say thats a big fail. A note from Amazon states that many customers are having connection issues and they have no idea when it will be fixed, but to check with EA for more info. EA is bringing new servers online over the next few days to solve the problem, and Maxis is fixing bugs as quickly as they can, but the damage has been done.

After the temporary suspension, it looks like Amazon is yet again allowing downloads, but who is going to want to buy a copy after seeing these reviews?