Mobile developer Jim Rutherford’s son Owen loves to play Minecraft. To enhance his Owen’s gaming experience – or perhaps to gently remind him how long he’s been playing – Jim made it so that lamp on Owen’s desk changed color and intensity to match the game’s day and night cycle. 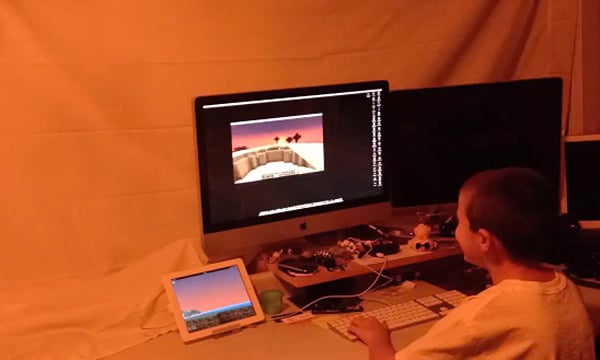 The hack is made possible largely because of the new Philips Hue LED bulb, which can produce light in a variety of colors and intensities and can be controlled over the Internet. The other half of the project is an iPad app that Jim himself wrote. The app not only controls the LED bulb, it also allows Owen to match the time on the app with his game. Skip to around 3:35 to see the hack in action:

Jim has posted the source code for the app on Github. He also said that he’s going to submit the app to the Apple App Store. If it’s passed, he won’t charge a cent for the app. Which is nice, considering the Philips Hue is freakin’ expensive.

[via Jim Rutherford via TechCrunch]