The Microsoft Kinect has been hacked to do all sorts of things, and while some of the hacks are for the good of humankind, most are pretty superfluous. But the Microsoft Research Cambridge team has recently put together a Kinect demo which could provide neurosurgeons with interactive 3D visuals which could help them save lives in the operating room. 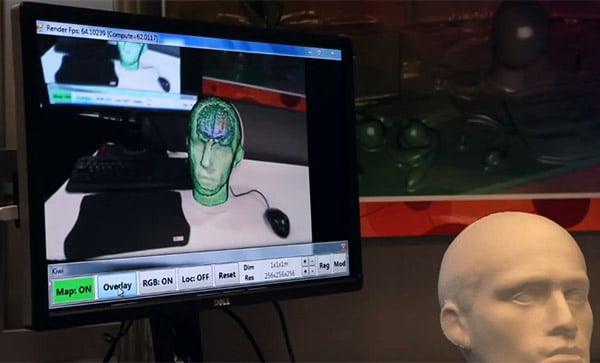 The prototype system shows how a Kinect could help provide augmented reality visuals which overlay the patient’s MRI or CAT scan data with the real world. This would allow doctors to move around the patients head and visualize problem areas non-invasively, and to help them map out a better action plan before starting surgery.

The system uses a touchscreen tablet with a Kinect duct taped to the back of it, tied to a custom application through the Kinect Fusion API. In the video below shot by IEEE Spectrum, Microsoft Research’s Ben Glocker demonstrates how the system works:

While this particular system isn’t exactly the most portable, it’s still quite impressive, and you could see how combining Kinect tech with some sort of head-mounted display could really change the way surgery is performed. Now if only they could work out a way that you don’t have to lie in that noisy and claustrophobic MRI machine.