I’ve been waiting a very long time for somebody to build a single game system which could play all of today’s console games. Well that day is today – courtesy of master modder Ben Heck. For his latest project, Ben has created a single mutant machine that combines a PS3, Xbox 360 and Wii U. 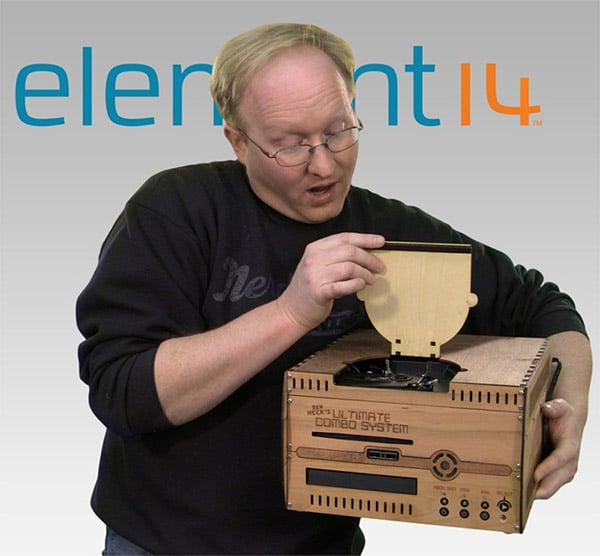 Heck’s wood-cased Ultimate Combo System may not be the sleekest and most modern looking thing, but it’s still an impressive build, having combined these three current-gen consoles in a single box. We don’t know too much about the final build other than the picture shown above. However, Ben and element14 have teamed to release a 3-part series chronicling this epic build. Here’s Part 1 for your enjoyment – skip to about 1:25 to get to the meat of the mattter.

Surprisingly, this is the first time that Heck has disassembled a Wii U or the new PS3 super slim, but he digs right in and starts ripping things apart right away, giving us all a glance inside the two most recent consoles. Parts 2 and 3 of the build video will be released on element14 on March 15th and March 23rd, respectively, and will reveal the construction of the case and assembly of all of the components. From what I can tell, the final build will include HDMI switching to a single output, and I’m betting it’ll have a power strip built in so you can plug it in with a single cable – but that’s just conjecture on my part. Personally, I can’t wait to see exactly how the finished thing works.

While I’d assume Sony, Microsoft and Nintendo will never collaborate on such a console, you can still get your hands on this one. Those of you interested in the build can enter to win it over on element14 now.